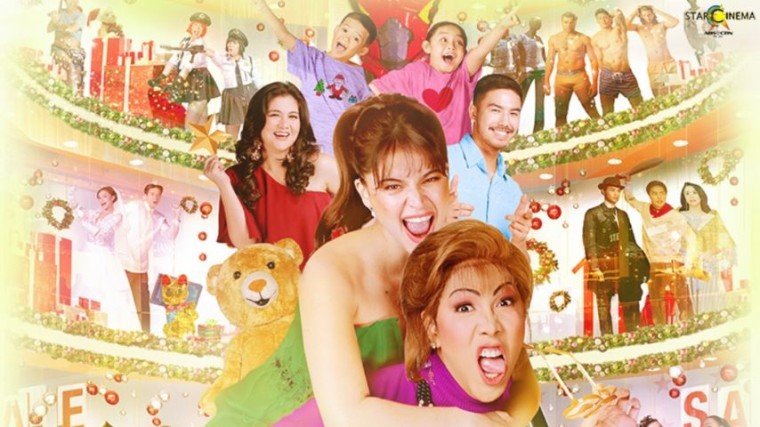 Of course, like in any comedy – whether here or in Hollywood – not all the humor works one hundred per cent. But a great portion of the jokes laid out all over the movie are effective. In fact, some will even send you rolling in the aisles.

When Vice Ganda hit it big-time about a decade ago, he was easily dismissed as a flash-in-the pan. Apparently they were wrong. In a very short period of time, he even became the annual Metro Manila Film Festival champion – and remains so to this time.

Oh, but what awful films he did in the beginning. Sisterakas – with Kris Aquino and Ai-ai de las Alas was abominable. Girl, Boy, Bakla, Tomboy was tolerable because of Maricel Soriano. And all that effort to change into different characters was also appreciated by those who watched it.

But Gandarrapiddo: The Revenger Squad was the worst experience moviegoers ever had next to EDSA traffic. I remember wanting to shoot myself inside the movie theater twenty minutes into the film.

Last year’s Fantastica, however, was a joyful experience – thanks in many parts to the performance of Jaclyn Jose, who played Vice Ganda’s mother. Precious was that scene where she had to pee, but couldn’t go to the bathroom because Vice kept stopping her. Even Jaclyn Jose’s facial muscles did comedy for that scene.

Also a stroke of genius was the treatment of Bela Padilla’s character. So there was Bela - sexy and ultra-feminine. Her voice, however, was provided by Gus Abelgas of SOCO. It was hilarious.

In the ongoing Metro Filmfest, Vice Ganda fields The Mall, The Merrier and it is a winner – both at the box-office and in terms of quality.

Directed by Barry Gonzalez, The Mall, The Merrier casts Vice Ganda and Anne Curtis as siblings who get separated as kids. Their parents are played by Jameson Blake and Elisse Joson, who are both made to look old in the beginning, but are shown as their young selves toward the end of the story.

The family actually makes its fortune by putting up a mall called Tamol Mall – obviously a play around the crude word tamulmol, which means stupid or idiot in the vernacular. Unfortunately, the father is caught cheating and so the marriage breaks up. Anne is brought to Australia by the mother, while Vice is left behind in Manila where he helps run the mall with his cold-hearted father.

When both parents die, Anne returns to Manila with the intention of getting the mall for herself. Although the mall has gone to pot, Vice is not handing it over to Anne without a fight. Another twist is provided when Dimples enters as a beauteous villainess with a mysterious background. From here, the movie goes partly horror, but still remains a comedy all throughout.

Dimples’ main objective in the story is to get hold of a magical book that would give her control over the world. According to the character played by Vice, the book is so important because “it reveals who the true girlfriend of Atong Ang is.” That is not how it is worded, of course. It is truly hilarious – the way Vice delivers it and you should watch it yourself to appreciate that one brilliant line in the movie.

Of course, like in any comedy – whether here or in Hollywood – not all the humor works one hundred per cent. But a great portion of the jokes laid out all over the movie are effective. In fact, some will even send you rolling in the aisles. Even those that are supposedly morbid still elicit laughter – just like what Vice Ganda does with the cremated remains of his parents.

But the real winner involves an entire sequence with Ruffa Gutierrez, who is cast in a short, but very special role as the daughter of Annabelle. No, not Rama, but the killer doll.

At the start of that entire scenario, I thought Ruffa was just going to waste her time in this movie. Garbed in a silly Annabelle doll costume, it definitely wasn’t befitting of her Miss World Second Princess stature. Surely, I was wrong because this entire chapter wouldn’t have worked had the part been given to another actress.

As the killer doll, she tries to stab Vice who fights her off. They fall to the ground and get on with the fight while rolling on the floor. They continue to roll and roll until they get out of the mall (actually Harrison Plaza, which was used as the location of this film). They still roll way past the National Museum in Manila until they reach the ABS-CBN studios in Quezon City.

Now, remember this is an ABS-CBN production done in collaboration with Viva. The two only stop fighting when they realize that – gasp – they managed to reach, while still rolling, the main building of rival GMA-7.

And it’s not only Ruffa who is involved in this entire hilarious episode. Of course, Annabelle Rama makes her appearance, too, and she is effectively funny. But Ruffa has to be congratulated for giving her all in this short role. She gamely takes part in this film like her life depended on it.

Another actress who gives her full cooperation in this movie even in a cameo role is Charo Santos. Yes, the Charo Santos-Concio, everyone’s boss. Honestly, I’m the one embarrassed for all the things they make her do. But, hey, she seems to be okay with all of that – so why should I make that my problem?

One truly anticipated cameo appearance is that of Ion Perez, who is – as everyone knows by now – the love of Vice Ganda’s life. So how does he fare?

To be fair, the guy has promise. Playing the role of a male mannequin that comes to life, Ion has good comedic timing. He is, however, still quite raw and needs to be further developed.

If ever I have any quarrel with this film, it is the fact that the English subtitles sometimes preempts the dialogues. Well, you may have noticed how practically all Tagalog movies now have English subtitles. This is done because there are so many platforms now and the producers want to be ready in case their respective films end up in Netflix, Iflix or wherever.

It’s just unfortunate that the English subtitles of The Mall, The Merrier get a bit distracting and sometimes takes away the fun of watching the film.

The snooty non-Vice Ganda moviegoers may ask – what fun? In spite of Vice Ganda’s position as a local entertainment icon, he still has detractors. Some friends of mine are even surprised that I watched The Mall, the Merrier. Imagine their shock when I told them I enjoyed every bit of it.

They can say all they want, but this is one film that truly made my Christmas merrier.

The Butcher | Korina gets fake this Christmas