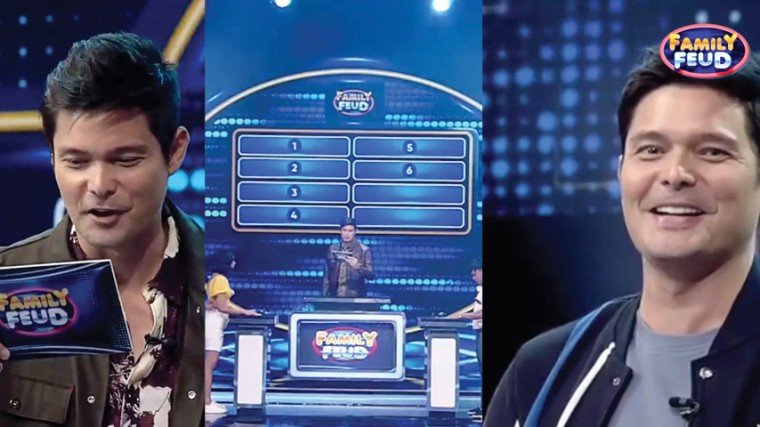 Watching Family Feud on GMA these days is still fun and exciting for me. I guess that goes for everyone else since it is doing extremely well in the ratings game. Maybe it helps that the pacing of the show even seems to be faster these days. Perhaps it’s due to the fact that Dingdong Dantes as the current host doesn’t dawdle. He is really doing a good job – plus, he is never abrasive and tries to hold his tongue even some of the contestants deserve a bonk on the head at times.

Family Feud was my favorite game in my desk computer (no laptops yet) during my youth. Needless to say, I also watched with frequency the original American version of Family Feud when it was still being aired in the old RPN-9. I never thought that one day I was going to be a contestant in it – the Philippine edition, that is.

That happened when my then talk show, Startalk, was invited to the program to play against the Master Showman program of German Moreno. Oh, that was more than 10 years ago – when Richard Gomez was still the host.

But I still relish the experience in my head. Maybe because we won and took home the big prize. It was one of the most memorable bonding moments I had with Joey de Leon, especially since we were the pair that worked on the final round.

Watching Family Feud on GMA these days is still fun and exciting for me. I guess that goes for everyone else since it is doing extremely well in the ratings game.

Maybe it helps that the pacing of the show even seems to be faster these days. Perhaps it’s due to the fact that Dingdong Dantes as the current host doesn’t dawdle. He is really doing a good job – plus, he is never abrasive and tries to hold his tongue even some of the contestants deserve a bonk on the head at times.

There was this group of contestants, for instance, that must have really tested his patience. Heaven knows where these people came from. Most likely from the very bowels of the seediest side of earth.

The team captain – some starlet who recently became a sensation (all for the wrong reasons) on television. She came out on-cam with wet underarms and didn’t seem to be bothered by it.

Later, her mother also showed off her armpit for the whole nation to see. Ma’am, the host only asked you which part of the body people love to smell. You only had to say armpit. There was no need to display it, especially since she wasn’t one to qualify for a deodorant commercial.

This may come out unchristian, but never had local television witnessed such crude and uncouth behavior. Every member of the family was boorish.

Okay, this family, at least, had no pretenses. They are informal settlers. In their own words, they are squatters, even if that term is no longer politically correct. That in itself is not a crime.

But can’t you be poor and still maintain your dignity? There are a lot of poor, but respectable people. You see that among a lot of slum dwellers, particularly those who are able prove to the world that there is dignity in labor.

That family, however, is something else. Even Mother Teresa would be peeved and tempted to tell them to behave properly.

To Dingdong Dantes’ credit, he showed no condescension even when all the family members were making spectacles of themselves. Some viewers must have felt how uncomfortable he was faced with such rudeness, but to be fair to him, he remained a true gentleman to the core.

Surely, he came into the show psychologically prepared. Oh, he really needs that since every episode of Family Feud will keep you at the edge of your seat because of the unpredictability of each one. You never know what will happen and how each edition will end.  Take, for example, that day when the cast of Bubble Gang, with Sef Cadayona at the helm, battled it out with an all-female group, led by Tuesday Vargas.

Team Bubble Gang was losing in all the rounds, as in miserably. Gabriela and the other women’s groups must have been ready to uncork the champagne bottle when -- gasp! -- Bubble Gang managed to steal all the winnings of Tuesday and company by a mere stroke of luck.

But that’s not all. In the end, Bubble Gang even brought home the P200,000 jackpot prize!

Another recent episode I caught had the program pit local comedians against each other. While watching this edition, you’d find out why comedy on TV remains stagnant - given the kind of comedians we have in the country.

And then there was this other episode that saw the young cast members of Pepito Manaloto battling it out with the Kapuso hunks. The team captain of Pepito Manaloto was Mikee Quintos. This intelligent actress helped a lot in scoring a victory for her group.

The Kapuso hunks? It’s true what they say about – hmm, what is it again? All brawn and no brains.

But then, that’s all part of the excitement and fun and I remain a Family Feud fan. I hope GMA’s contract with Fremantle, the American production company which gives the license for Family Feud Philippines to be aired on TV, gets renewed again and again.

Having watched Family Feud since forever and as a past contestant, I can share a few tips for future participants in this program: First of all, bear in mind that the people being surveyed by the staff of the show are not Forbes Park matrons, but the masses of this city.

In this pandemic age, perhaps they now do the surveys online. But just the same, always give an answer based on the mentality of the man-on-the-street. I am not trying to demean the kind of thinking common people have. It’s just that they are the majority.

In an old episode of Family Feud (also on GMA) that was hosted by Edu Manzano, the question was: What animal is always considered fat? Pig, of course, is the top answer.

Kylie Padilla said “vaca” (cow),  but it wasn’t there. A well-read person would have said the same because in the English language, an obese person is often described to be “fat as a cow.” Apparently, that’s not part of the lingo of the usual person you meet on the street.

The contestant should also be in tune with the times. Choices that were popular at some era may no longer be relevant in the present period.

In 2011, for instance, the host (Edu Manzano that time) asked for activities often conducted in wakes. These were the answers accepted then: Umiiyak, nagtsi-chismisan, nagkukukot, and nagsusugal.

Forward to the present – in the episode that featured the young talents of Pepito Manalo. The same question was asked. Swapping stories was still there – although the term used was the more decent “nagkukuwentuhan” and not “nagtsi-chismisan.”

Kokoy de Santos said “kumakain ng mani” and everyone thought it was a good answer. It actually was. But no, “nagkukukot” (basically eating peanuts or chips) wasn’t among the popular choices anymore. Maybe it had to do with the pandemic. Food was no longer passed around during wakes – no thanks to the coronavirus.

Gambling, however, was still there. Long live e-sabong!

It is also very important for the contestant to listen to the answers of his teammates and those of the opposing camps. Mark Herras, for instance, wasted his turn this way: He simply repeated the choice of a contestant that was not on the board. Mark clearly was not paying attention.

In the final round, try to go first because the one who comes after you will have a more difficult time since answers you’ve already given during your turn cannot be repeated.

Most of all, try not to be distracted. When I was in the final round, I merely looked down and stared at my shoes to stay on focus since there were distractions all around me – mostly people rooting for our team and cheering.

While intelligence is not necessarily the be all and all to score a victory in this game show, that still counts for so much. But really, what matters to win big in Family Feud is common sense.

Although Family Feud is not an educational show in the tradition of Battle of the Brains, watching this program is still worthwhile because it makes you think fast even as a viewer.

It is best to watch it with a lot of other people – preferably family members. There’s no need to get into a feud about this. Watching this game show is truly the perfect family bonding while we’re are still in the middle of the pandemic. And yes, even in this season of political tension.