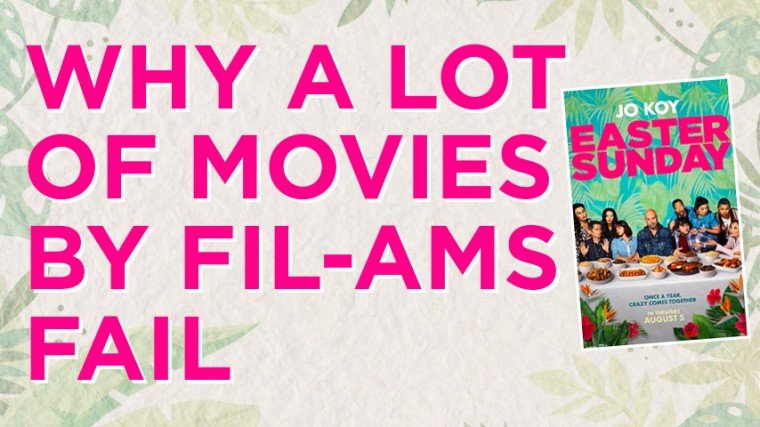 Of course, Easter Sunday is about the lives of the Fil-Ams in the US. But, clearly, there is a lack of understanding here regarding Filipino traditions. For instance, there is not much ado about Easter Sunday – unlike what is pointed out in the Jo Koy movie. It is not the Super Bowl of the Philippines.

Two weeks ago, there was so much excitement over the release of Easter Sunday, a US-made film featuring celebrated Fil-Am stand-up comic Jo Koy. But when the reviews finally came out, the feedback was mostly negative.

I haven’t seen Easter Sunday and what I’m writing below is not a review, repeat, not a review. It is an observation as to why a lot of Fil-Am made movies end up disastrously. Yes, there had been other projects similar to Easter Sunday released in the last few years and some are still on Netflix.

A lot of those movies look promising on paper. But once executed, most of these film products always turn half-baked.

Why is this so? Maybe it’s because the creators of those films are based in America and they don’t have a feel of the true fabric of Pinoy culture. And yet, some of them dare critique Philippine heritage and the Filipino psyche.

Of course, Easter Sunday is about the lives of the Fil-Ams in the US. But, clearly, there is a lack of understanding here regarding Filipino traditions. For instance, there is not much ado about Easter Sunday – unlike what is pointed out in the Jo Koy movie. It is not the Super Bowl of the Philippines.

The Catholic Church had always stressed that Easter Sunday is more important than Christmas. But Filipinos don’t really make a big deal over what we call here as “Pasko ng Pagkabuhay.” Easter Sunday is a weekend spent by Pinoys returning from their Holy Week break.

I think that’s the same in America because Catholics there are allowed to absent from work on Good Friday. But a lot of them practice their religiosity vacationing out of town.

Some 80 or so per cent of Filipinos who live in the US have either TFC (The Filipino Channel) or GMA Pinoy TV or both. That’s where they get most of their info regarding the Philippines. But do they really understand what’s going on in this country at the moment or in the last few decades?

I have relatives in both coasts and they constantly worry about my safety. During the time I was making plans to build a new house, an aunt of mine asked me where I was moving. When I said Quezon City, I could practically hear her holler from the other side of the Pacific.

“Quezon City?! Puro patayan d’yan! (It’s mostly killings there!)” It took quite a while for her to calm down.

How do I explain to her that in any place, there are good areas and bad areas? Even in America, there are the so-called good and bad neighborhoods.

But my aunt still couldn’t be convinced. She insists that she knows exactly what’s going on in the Philippines “because I watch TV Patrol every day.”

That aunt left Manila right after EDSA I – when ABS-CBN had just made a comeback after martial law shut it down in 1972. As we all know, Channel 2 lost its franchise in 2020.

When Congress ganged up on this Lopez-owned network, the lawmakers enumerated its sins – some real, mostly imagined. What it failed to cite was ABS-CBN’s biggest crime to broadcasting – hurling TV Patrol and its exaggerated delivery of the news to Filipino viewers, here and abroad.

According to my aunt, she and her Filipino co-workers are afraid to even take their vacation here in the Philippines for fear that they’d be killed. It’s as if there are no killing sprees in the United States.

And then there’s this friend from childhood who had been away for close to four decades. He dabbled in real estate in America and was able to acquire five houses for himself.

During a more recent visit to the US, he had been nagging me to get a house in Las Vegas. But I already have a house, I told him. It’s in a rather nice area – yes, in Quezon City, which – contrary to my aunt’s belief – is relatively safe if you ask me.

My friend’s retort: “Pero sa Pilipinas lang ‘yan! (But that’s only in the Philippines!) It’s a different story when you have a house in the US.”

After recession hit America, my friend lost all five houses. He now rents a rundown two-story structure in some seedy part of downtown Los Angeles. Of course, I feel bad for his reversal of fortune, but like so many other Filipinos I know who made good in the US, he felt high and mighty when he became an American citizen.

Another friend based in New York was just as condescending toward Filipinos. Walking down 5th Avenue one time, he saw a pretty brunette crossing the street. This was his immediate comment: “Puede nang artista sa Pilipinas ‘yan, ‘no? (She could already qualify as a movie star in the Philippines, couldn’t she?)”

In my head, I could only scream: “There are a lot more beautiful women in the Philippines!” Besides, it takes more than a pretty face to become a movie star.

I also remember this incident while treating out to dinner visiting in-laws from the East Coast. This was at a time I was still building my home. When they found out that I was in the middle of constructing a house, one of them excitedly insisted that I make my kitchen huge.

This was her explanation: “If you build a big kitchen, you and your guests can hang out there while you’re cooking. Also, a house with a large kitchen is easier to sell.”

I didn’t want to break her heart, but this was what was in my head while she was rambling on and on about the advantages of having a big kitchen:

In the Philippines, the cooking is done ahead of time whenever there is a get-together. There is no reason for the guests to hang out in the kitchen because they stay mostly in the dining room where the food is brought to the table or laid out on top of a buffet cabinet.

Filipinos are señoritos and señoritas, especially when dining at another home. They are not expected to help in the kitchen - unless the host lives alone and has no helper to assist in the preparations.

I don’t intend to sell the house because that’s where I intend to spend my final years.

Unfortunately, a lot of Filipinos (although not all) who had long been US residents think they know so much more. This is why they insist on what they believe is best for us – poor us who had not been given the chance to savor the stateside way of life.

Of course, I know of a lot of Pinoys who chose to give up their green card and opted to stay in good, old Philippines. Majority of the Fil-Ams think those Filipinos who threw away the American dream are fools. But that is not necessarily so. To each his own.

I myself was a US immigrant. When I was there, I had to stack canned goods and drive a forklift at a commissary to support my studies. I was in Boston and the Filipinos in the area were wondering why I had to do odd jobs when I was an established talk show host in the Philippines. Couldn’t I have applied in TV stations there or even write for the papers?

I had difficulty explaining to everyone that it wasn’t that simple. I still had to learn the culture thoroughly and that would have taken at least a decade or so. Only then would I dare give an opinion on anything about the American way of life.

In my observation, it is mostly the Fil-Ams who feel superior over those who were left behind in the Philippines. Expats from Hong Kong, some parts of Europe and the Middle East appreciate whatever little progress we have here in the country.

Of course, I know of other Pinoys in the US who envy our relaxed and easy way of life here. It is their wish to retire in the Philippines, except they cannot just pack up and leave America because of the medical benefits they enjoy there.

So you see, some of them should just learn to keep their opinions to themselves. We’d love to have them over. But I wish they’d stop thinking that they know better. Life is far from perfect here in the Philippines. But not all our lives are miserable. And we are not losers just because we live in the land of our birth.

The Butcher | Cherie Gil was more than just a contravida