The Met Gala returns after a year of quarantine 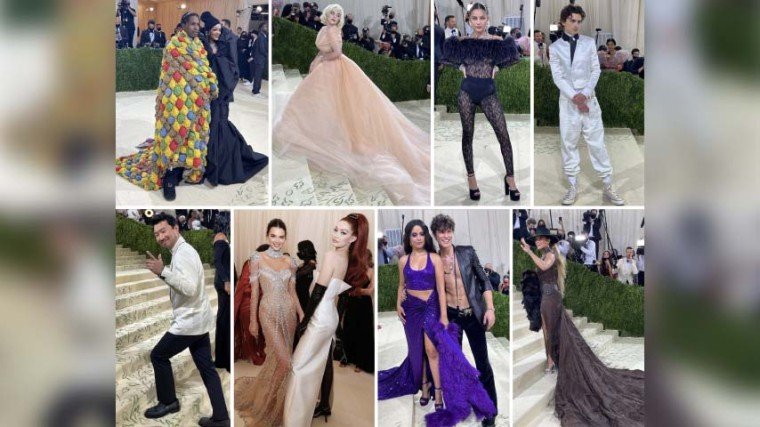 The Met Gala, called "the Oscars of the fashion world" was cancelled last year due to the COVID-19 pandemic. But this year, after New York opened up its city for business, fashion's biggest night, traditionally held on the first Monday of May, fell right in the middle of the New York Fashion Week last September 13. Hollywood A-lister attendees include (clockwise from top left) Rihanna and A$AP Rocky, Billie Eilish, Olivia Rodrigo, Timothée Chalamet, JLo, Shawn Mendes and Camila Cabello, Kendall Jenner and Gigi Hadid, and Simu Liu.

Glitz and glamour bedazzled New York City as the Met Gala makes it return after a year of quarantine.

The Met Gala, called "the Oscars of the fashion world" was cancelled last year due to the COVID-19 pandemic. But this year, after New York opened up its city for business, fashion's biggest night, traditionally held on the first Monday of May, fell right in the middle of the New York Fashion Week last September 13.

This year's Met Gala was touted as a "more intimate" affair as organizers have established strict protocols for the health and safety of all guests.

Met Gala event organizers have issued a vaccination mandate and mask requirement for all attending this year's benefit.

The gala's red carpet was held at its usual location: the Metropolitan Museum of Art in New York City. The gala was in celebration of the Costume Institute’s newest exhibition, “In America: A Lexicon of Fashion,” which opens to the public in the Anna Wintour Costume Center on September 18th.

The Met Gala’s red carpet has a history of creating memorable outfits and this year was no different.

Co-chairs this year are Gen Z's Billie Eilish, Timothée Chalamet, Naomi Osaka, and Amanda Gorman. VOGUE selected them for breaking down barriers, embracing individualism and making their mark in fashion early on in their careers.

Speaking to VOGUE, Andrew Bolton, the curator in charge of the Costume Institute says: "I've been really impressed by American designers' responses to the social and political climate, particularly around issues of body inclusivity and gender fluidity, and I'm just finding their work very, very self-reflective. I really do believe that American fashion is undergoing a renaissance. I think young designers in particular are at the vanguard of discussions about diversity and inclusion, as well as sustainability and transparency, much more so than their European counterparts, maybe with the exception of the English designers."

He adds: "Part two, In America: An Anthology of Fashion, will open on May 5, 2022, and will explore the development of American fashion by presenting narratives that relate to the complex and layered histories of those spaces. It will also close on September 5, 2022."

Hollywood A-listers donned specially designed couture gowns and suits by their favorite designers and made their way on the red carpet after a year when COVID-19 put the world on reboot.

Definitely, fashion is alive once again and VOGUE has witnessed all its noise as celebrities make their way on the red carpet.

Seen making their way to the Met Gala Ball are over 100 celebrities including:

Former reality show child star Honey Boo Boo is all grown up and wants to be called by her real name, Alana Thompson