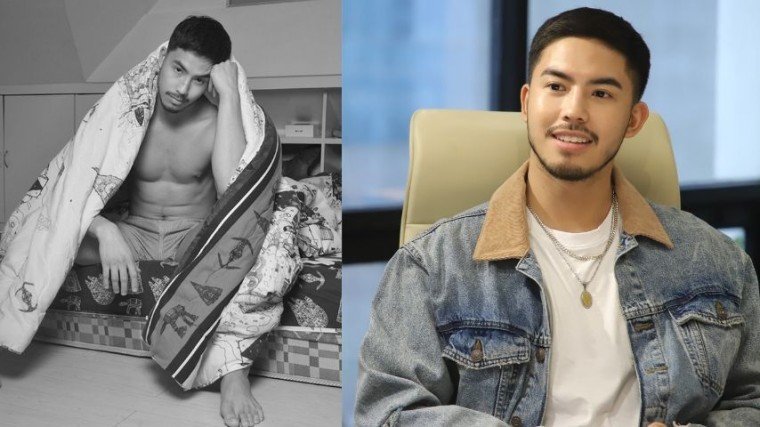 “I guess it’s not that I don’t like it, it’s more of I’m a little overwhelmed,” pag-amin ni Tony sa mixed reaction ni Tony Labrusca kapag tinatawag siyang sexy-dramatic actor. “At the same time, when you get labelled that, ang taas na ng expectations sa’yo

And why not when he’s sexy and, for a relatively newbie, he can act.

But Tony, to this day, remains uncomfortable with the tag.

“You know siguro everybody who gets labeled as a...—well, not everybody, I know kasi some people who do want to be labelled as sexy actors and sexy actresses—[But] for me, that’s not something that I was ever really comfortable with...” panimulang paliwanag ni Tony na naka-usap kamakailan ng pikapika.ph sa story conference ng first Viva Films movie niya na In Between Goodbyes.

“So when I pose a picture that seems—quote-unquote—sensitive... that’s because I feel really good about myself in a... let’s say, superficial way. When I see a picture or a video myself, that’s... I’ve captured a moment that I really want to share with my audience.

“But at the same time, I guess it’s because it’s so new to me. You know what I mean? I never expected that I would be labeled as a sexy actor so fast...”

“To be completely honest, how I viewed my career... I’ve kinda wanted it to go this way...I wanted my career to go this way along with everybody who was my contemporaries as well. But I noticed that my career started going this way. You know what I mean?” very animated na dagdag esplika ni Tony.

“So, it was a little interesting for me kasi usually when you’re called as a sexy-dramatic actor, medyo may-edad ka na rin, marami ka ng experience...so for me, I guess it’s not that I don’t like it, it’s more of I’m a little overwhelmed. At the same time, when you get labelled that, ang taas na ng expectations sa’yo.”

“I’m not scared...it’s not of fear. Actually, when I felt na ang bilis nga ng mga nangyayari sa career ko, it was exciting for me and it’s still is very exciting for me, you know? It just... it’s something that I’m very grateful for...

“I get nervous because you’re only as good as your last project, you know? And because my career has gone so fast, the expectation gets higher and higher each time...and I’m going to be completely honest, the expectation was so high on me when I did Sino ang Maysala and I was so scared that I was gonna fail, you know? I thought did I fail actually. I thought I let everybody down during that project. I’m happy to whoever appreciated my role there naman, but you know...”

“It’s exciting but at the same time, it keeps you on your toes...and fear is what keeps people alive  so...It’s a dog- eat-dog world here in showbiz, you know? That’s what we signed up to do. So I can’t complain. I can share my sentiments with you guys as a human being. But at the end of the day, I can’t whine and—excuse my language—bitch about my job. Because this is what I signed up for.”