What does Nadine Lustre think of being called "President"? 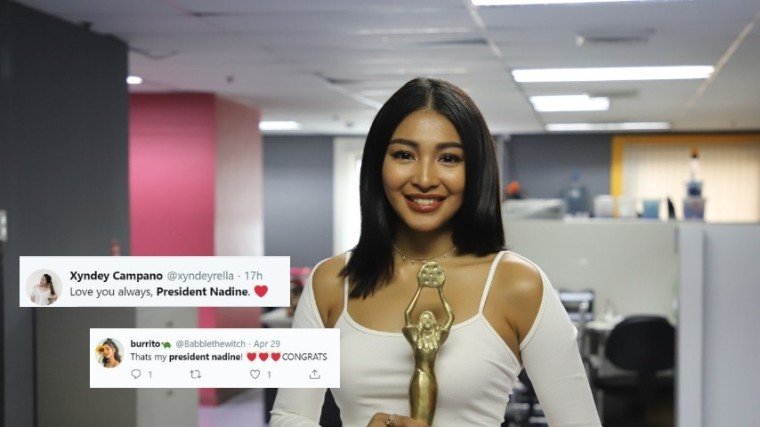 What does Nadine Lustre think of being called "President"?

Since winning the FAMAS Best Actress award for her performance in the 2018 film Never Not Love You, Nadine Lustre has only solidified her image as a multi-talented star—part of the reason why her fans jokingly refer to her as their president.

The meme, which started circulating on Twitter as early as 2016, refers to fans' love for Nadine and their desire to follow in her footsteps--hence the nickname "President Nadine."

Is the Best Actress awardee aware of this nickname?

Said Nadine, the funny nickname is inspiring to her, as it means that she's become a role model for her fans.

"Honestly po, it's just really nice to be someone a lot of people look up to and na ako 'yong inspiration nila and parang they look up to me as someone who's strong and very empowered," she said.

"It's inspiring also since sa beginning naman po no'ng pumasok ako sa showbiz, 'yon naman po talaga 'yong gusto kong gawin, I want everyone to, you know, to just strive and reach for your dreams and all that."

Nadine added that becoming a role model is special for her since she didn't have anyone to look up to while she was growing up. Now, the actress wants to become a good influence to her fans by being open about her struggles and her mental health journey.

"Ang pinagdaanan ko po kasi, I was very insecure when I was younger and I was looking for someone, a role model to look up to, na parang to show me na you know, it's gonna be a good day, you're gonna have better days, and it's okay na you have this now, you're gonna get over it, 'yong ganon. Wala po kasi akong naging role model when I was younger so 'yon po, wish ko magkaroon.