Way back in 2007, while all the Kapuso artists were busy packing for their annual Holy Week break, GMA management suddenly decided to drop a bomb on its talents. It was an announcement that was met with protestations – loud and violent enough to topple over the network’s main transmission tower.

The howls of protests from the artists were actually valid. In spite of the fact that majority had already booked trips abroad and locally, everyone was still made to stay put for the shoot of the station’s summer plug—in Baras, Rizal—on a Holy Thursday!

Grudgingly, we all assembled early in the morning on some hillside in Baras wearing bold summer colors. Waiting for my take, I noticed a solitary figure seated on a protruded slab of concrete. She was very pretty and looked quite different from the other GMA female artists with sharp mestiza features.

Although she was a relatively new artist, I knew her name: Glaiza de Castro. I was familiar with her because I had seen her works on TV – mostly in drama anthologies – and had been impressed with her talent.

I also knew that she had an equally talented brother: Alchris Galura (her real name is Glaiza Castro Galura). Alcris that time was one of the acting wonders of indie movies.

Even if she kept mostly to herself, I was aware that Glaiza wasn’t really being a snob. She wasn’t shy either. All that was needed was for me to start a conversation with her and she instantly opened up.

As soon as she talked, her provincial roots instantly gave her away. It was very charming and disarming. I admired her all the more, especially since she made no effort to cover up her humble origins.

A plus point was the fact that she’s from Valenzuela. I am from Hagonoy, Bulacan. I may not have been born and raised there, but I’ve always considered that as my beloved province. I therefore am fond of fellow Bulaquenos.

Valenzuela may have already been annexed to Metro Manila, but Glaiza’s part of the city is not the industrialized one. She is of the rural Valenzuela – the area where there is still much of the Bulacan charm and simplicity.

Glaiza confirmed this fact once more during our interview with her for this site’s online program This is Showbiz. Oh, she had a wonderful time reminiscing those days of her youth in Valenzuela.

Although she went through financial wants, her growing up years were happy. This must be the reason why she can very well afford to simply get amused recalling those times when she was still struggling in show business.

How many times did she have to get off and help push her father’s old and battered vehicle because it had conked out in the middle of the street? What about those instances when she wasn’t even allowed to hitch a ride with the service van because she was still a nobody?

All that has changed now.

During our interview, I told her how happy I am for her success. Her achievement in showbiz is quite difficult to duplicate. For one, she has become the new Crossover Queen – after Gina Alajar, Cherry Pie Picache, and Jaclyn Jose who all shift from indie to mainstream with ease.

Like these respected actresses, Glaiza can also alternate between lead and supporting parts and even become villain to the lead character and vice versa. All that is proof of Glaiza’s versatility as an actress.

Oh, yes, I lost no time during the interview joking about how she should be arrested for jaywalking. Knowing her, she’s still aching up to now to cross over to untried territories.

While recalling that 2007 Holy Thursday when we were compelled to work, she asked me: “Bakit nga ba tayo pumayag?” (Why did we agree to do it?)

Looking back, I now realize that it was part of the realities of showbiz. From my end, I agreed to show up for the shoot because my executive producer came to me – practically walking on her knees (she was going to get into trouble if no one from our show took part in that summer plug).

On the part of Glaiza, it was professionalism pure and simple. Heck, she could have said no – the way some artists did, especially since there was no extra pay for that Holy Thursday work. But she was being a good soldier.

In all our years in GMA, I never heard anyone complain about her. She had always been professional and cooperative. And she delivers the goods – quality work even.

Prior to the interview, the last time I saw Glaiza was in October 2015 – at the Manila Hotel where we accidentally bumped into each other during a buffet dinner with our respective families. Talking to her this time, I sensed how she has matured mentally. Physically – she hardly changed.

But quite noticeable was her intellectual growth, especially with the way she answered questions.  A tricky one was when we asked her about the entry of former Kapamilya queen Bea Alonzo into the GMA fold. But leave it to her to give a smart but very honest answer.

I’m also very happy that Glaiza has invested well. She stays mostly in Baler, Aurora when she doesn’t have work. She was wise enough to have purchased a property there for her family.

Even her personal life is doing well – having found the right man to marry: David Rainey, who is originally from Belfast in Northern Ireland. He is a businessman. But more importantly for Glaiza, who has a lot of music in her heart, he is also a musician.

David may as well be called an honorary Pinoy. He likes anything Filipino – or anything related to Philippine culture. He is now Glaiza’s No. 1 fan and he admires all her works. Another one of David’s favorites is the music of Freddie Aguilar, particularly “Anak.”

Of course, David had proposed marriage to Glaiza. But the pandemic is still raging and the wedding has to wait.

While waiting for her trek to the altar, Glaiza remains productive. She is still very visible on television – in GMA’s TV version of the Ishmael Bernal film, Nagbabagang Luha.

Twenty-twenty-one is actually her 20th year in show business. I had to remind her that because she didn’t bother to count. In the past two decades, she was obviously too busy to keep track of what she has accomplished in the entertainment profession – and it’s a lot.

But trust her to keep forging ahead – looking for bigger challenges as an artist. Give her the crown. Glaiza de Castro should now be officially enthroned as the Queen of Crossovers.

MORE THIS IS SHOWBIZ EPISODES:

This is Showbiz #28: Getting to know the boy behind the actor Elijah Canlas 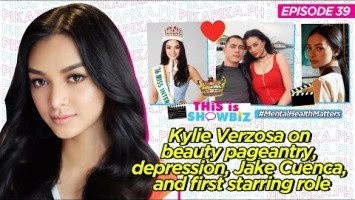 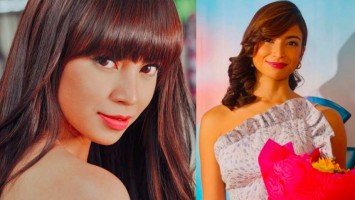