Her mom gifted her with a belated party, which Lorin decided to make into a Coachella-themed one, because her last big party was when she was seven years old.

The party, says Mommy Ruffa, was her way of thanking her daughter for being a loving daughter and for being a diligent student.

Lorin just came from the US, as she took a one-month pre-college course in Economics at the University of California, Los Angeles (UCLA).

Moreover, Lorin has yet to decide whether she’ll have a debutante’s ball once she turns 18. Her mom is suggesting she can just travel instead of mounting another big party.

But whether she gets an 18th bday bash or not, she has her 16th bday to look back to because it’s obviously equally grand.

Lorin, who was wearing a two-piece glittery dress by designer Rosenthal Tee on her special day, was visibly so happy during her party as all her friends were there enjoying the very Instagrammable Coachella setup.

Ruffa says her daughter isn’t allowed to entertain suitors yet. “She has to wait til she’s 18!,” exclaims Ruffa. “Wag siya magmadali.”

And Ruffa says it’s also all up to Lorin as to whichever part of the world she wishes to study college. “She can go to America, Canada, Europe... or kahit dito din (sa Pilipinas). Marami siyang options.”

But that’s a long way from bow as she’s only in junior high.

Meantime, Lorin will just savor being 16. 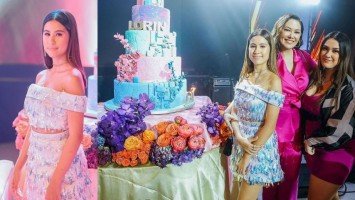